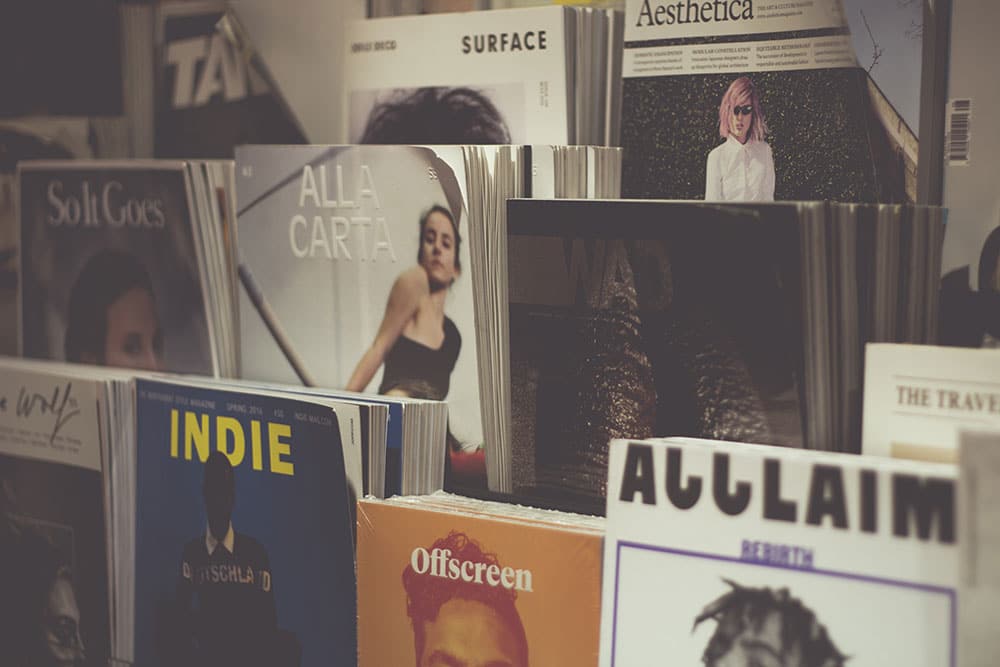 Film magazines cover a range of topics, from reviews to interviews and essays. Although the internet has caused a massive drop in print sales, magazines are still widely read.

There are a few different types of film magazines for you to choose from. First are the classical magazines which have been around since the start of cinema. This includes the Cahiers du Cinema which backed the beginning of the French New Wave. Then there are job-role, or focused magazines and lastly ones that just focus on mainstream movies.

Many of these magazines also have websites where you can get a taste of their content for free. So, whether you are a film student, film fan or work in the industry, there is something out there for you. The following film magazines are all available in print and delivered worldwide.

Sight and Sound is one of the oldest film magazines started in 1932 by the British Film Institute. This famous magazine celebrates the art of cinema and TV worldwide. It also runs the once-a-decade poll of the greatest films of all time.

Unlike other filmmaking magazines, it features expert film analysis and essays. It also includes in-depth reviews, interviews, and articles on cinema history. For example, the latest edition is on the films of the French New Wave.

The writers of Sight and Sound are some of the best English movie critics in the world. The monthly magazine is available in print and online. In addition, all subscribers gain instant access to the 80-year collection of past issues.

This magazine talks about the business, tech, and craft of independent filmmaking. In particular, it features interviews with film crew workers. It has an audience of more than 60,000 with both print and digital downloads. Inside expect to find interviews, essays, and filmmaking advice. In addition, it covers worldwide film festivals and events.

You can read online articles for free. Topics include screenwriting, directing, and post-production. Filmmaker Magazine prints only four times a year and has a discount for digital downloads. They also have a free newsletter with monthly filmmaking advice.

Film Stories is a new UK movie magazine launched in 2018 as a podcast, website, and print. Founded by Simon Brew, it aims to celebrate movies of all genres. In addition, it covers UK cinema and promotes independent films.

Since it’s a new independent film magazine, the audience is small but is growing every month. Features include reviews, interviews, film news, and a podcast. Film Stories Junior is aimed at the under 15’s and is published four times a year.

You might like Film Stories if you want a support a UK print that celebrates big and small movies. Filmmakers are also welcome to submit trailers and promote their upcoming films. New articles are also uploaded daily on their website’s front page.

Founded in 2005, this is a film magazine, website, and podcast. However, it’s slightly different from the others as it combines film news and reviews with art and design.

Each issue features a cover design dedicated to a key feature film. In addition to the magazine, they have also published filmmaking books, weekly podcasts, and a YouTube channel.

Little White Lie is for film fans and filmmakers who want to read interviews and in-depth movie reviews. It’s a lively magazine with graphics, film reviews, and even a monthly horoscope. Past film reviews and essays are available on their website.

Most movie magazines target the general film fan. However, some focus on a particular skill or department. This magazine, founded in 1920, looks at the art and craft of camera and lighting.

Its readership is primarily DOPs, directors and producers. Therefore, it only features interviews with DOPs, directors, and camera crew. In addition, you can find articles on tools, camera advice, and lighting designs.

This magazine is for those interested in the behind the scenes. It’s intended for both film students and industry professionals. The AC is a monthly magazine and only comes with a yearly subscription. However, there is also a more affordable digital version where you can read past issues.

If you are looking for more of a mainstream movie magazine, check out Total Film and SFX. These two film magazines focus on Hollywood and science fiction movies. Total Film, created in 2004, reviews feature films showcasing in the cinema and on streaming platforms.

The British magazine has over 30,000 readers and prints 13 times a year. Articles include celebrity interviews, reviews, and film essays. In addition, they visit film sets, review indie films, and offer sneak peeks of upcoming movies.

Total Film also has a very active website with daily uploads of news and reviews. Unlike other websites, they don’t cherry-pick and review every release. It’s available as a print and digital download.

To sum up, there is a wide variety of film magazines for all interests from professional filmmaking to those who simply just love to watch films.

Print magazines are slowly becoming less popular however it seems that specialist magazines like filmmaking are the exception. Some of these magazines have been around since the start of cinema and hopefully, they will continue to find an audience and inspire a new generation of filmmakers.

Better still, many of them are now available to download so you can read on your phone, laptop or tablet. 👌