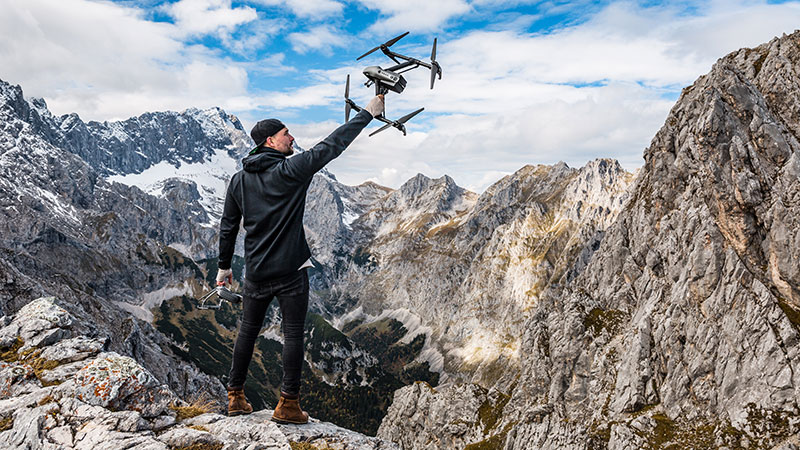 Looking for a new professional drone to add to your kit?

Aerial work is almost a necessity now for the modern day filmmaker. However it can be hard knowing where to start and how much to invest.

With this in mind we have decided to review the top 5 best professional drones for under £1000. Looking at various different features like footage quality, flight time, speed, in built functions and ergonomics.

If you’re anything like me you’ll hate making choices when it comes to equipment.

No matter what you choose you’ll wish you’d chosen something else within a few weeks. But when it comes to my Mavic Pro 4k, this has not been the case!

This is one of the best professional drones we recommend for under £1000.

The Mavic Pro 4k was an industry game-changer when it was launched (and it truly sank GoPro’s hotly anticipated Karma). Created to make it truly possible for a filmmaker to have a drone without needing another backpack. The Mavic Pro 4k combined convenience with performance and has some amazing features packed into this small but professional drone.

The Mavic Pro goes out of its way to make automation not only simple, but intuitive to your filming workflow. The controller is reliable and easy to use, and the drone can be set up in seconds (trust me on this).

With an impressive battery life, the ability to shoot in a flat profile, surprisingly good handling in strong winds, and a sleek look that won’t look out of place on a film job.

The Mavic is a perfect professional drone for any filmmaker who wants to take aerial work seriously without breaking the bank (or your back)!

However like any professional drone with a small sensor though, the 4k video is misleading. It does shoot 4k in terms of pixels, but the compression means you only really want to be putting the 4k into a 1080p timeline.

If you try to crop into 4k you will see the image degrade pretty quickly, particularly when shooting densely packed areas such as treetops.

The 12 megapixel camera holds up well, and will give you some impressive photos for Instagram. But don’t expect it to impress your client if they want to use it for a banner or poster.

Sharing many of the features of the Mavic pro 4k, but packing down to an even smaller size somehow, and at a lower price, this is the perfect professional drone for any travel filmmaker.

It might not share all the features of the Mavic, and some will argue the image doesn’t hold up as well, particularly when raising the ISO, but it also has some improvements on the Mavic.

With improved obstacle avoidance and a higher resolution when shooting in panoramic mode, this smaller but professional drone can actually deliver better results in many ways.

The Air even has more QuickShots than the Mavic Pro, allowing you 6 different preset moves to help you capture cinematic movements without the worry of trying to nail it by hand every time.

The reason we prefer the Mavic however, is the controller. The Mavic Pro 4k controller is exceptional. With low to no lag, a 1080p feed, and an inbuilt screen for realtime flight info… the Air controller has none of these.

Due to a different type of transmitter (the same one found in the spark), you may suffer lag or dropout that we were used to before the Mavic pro, and this is the last thing you will want when flying professional drones.

But it is still a top drone and this isn’t going to be enough of a regular occurrence to put you off.

Not that this matters, but it doesn’t look as professional as the Mavic Pro, which can lead to some nervous clients when you pull this small device out of your bag, but as long as the results are great then it shouldn’t matter. Perfect for any travel filmmaker.

The original version of what has now been improved to the DJI Phantom 4 pro, this professional drone is all about image quality, and it doesn’t disappoint.

The phantom 4 (pro if you can afford it) is a favourite for most freelancers who want to work solely on aerial filmmaking.

Coming in a fair size larger than the Mavic Pro, without the ability to fold up, this is the sort of professional drone you really don’t want to be carrying anything else with. It will fill up an entire backpack, with the controller nearly twice the size of the Mavic Pro.

But when it comes to image quality it does outperform many if not all video drones that utilise an in-built camera, and will deliver a crisp image every time.

The phantom 4 can travel up to 44.7 mph which is the fastest out of any the top 5 professional drones here. That phenomenal speed is down to the powerful motors that drive this quadcopter to the number three spot, and the number one spot for anyone who wants to focus solely on drone work.

With a 12.4 megapixel camera it offers the same count as an A7S mark ii, i.e. perfect for Instagram and online content, but not ideal for large prints.

We’re still waiting for that drone to appear on the market but it’s not easy with a sensor as small as these drones.

The image stabilisation on the phantom 4 does a brilliant job of keeping a steady shot even in high winds.

It yields smooth cinematic movements to support your high quality footage, and there are many different companies making ND filters for this camera. So you will have that beautiful ability to keep your shutter speed low.

YUNEEC decided to bring out the big guns with this professional drone, utilising six blades, breaking tradition from the common quadcopter. Why? So if one breaks the drone can still fly.

Only last week my friend’s phantom 4 pro (which he has used for years) fell out of the sky, an issue the Typhoon H Pro would avoid.

Obviously the trade off is size, with this thing looking more like a military tool than a filmmaker’s gadget.

But that isn’t necessarily a bad thing, and if you are working purely as an aerial operator, turning up on set with hexacopter delivering 4k video at 30fps that looks like something Batman might own…you’re going to impress.

The image isn’t quite up to the Phantom 4, but it’s by no means a bad image. It packs in obstacle avoidance and other smart features such as Point-of-interest, journey mode (up and out), and curve cable cam (CCC).

This allows you to control the camera whilst the drone flies a pre-determined route.

The controller on this is almost as big as the drone, which for those of you who like me, like to save every ounce of weight you can when travelling with gear, will be a big problem.

That said, the screen is built into the controller and is a highly reactive touchscreen. This saves you using all your phone battery power and means you can’t forget it either.

Coming in far cheaper than the previous four drones, the Parrot Bebop 2 is the most accessible professional drone for anyone new to the aerial game…

This drone has a lot going for it for such a small price range, and whilst it may not match the DJI range in terms of image quality or features, it does offer an affordable option for anyone looking to get into drone flying and still be able to yield images that can be used professionally.

Internal storage suggests this is meant only for those starting out, as you won’t want to rely on internal memory if shooting a whole day, even if you’re not shooting in 4k.

This is the biggest sticking point for anyone wanting to do this professionally.

However the affordability is why this professional drone makes the list and only having 8GB to play with will improve your shot selection if nothing else!

At 14 megapixel however, it outperforms the other professional drones in terms of photographic resolution.

So if your focus is on the photography rather than the video, then suddenly 8GB doesn’t seem so much of a problem.

Whilst most commercial drones are compatible with vision goggles, the parrot can be bought with one for very little money.

So it’s also a great purchase if you want to try your hand at drone racing without risking a £1000 professional camera. If you haven’t checked out drone racing, do it. Do it now.

So which of these professional drones should I buy?

There is something for everyone here, whether you’re new to the game or looking to upgrade your current professional drone.

Make sure you look into the laws of flying if you plan to do it commercially as it is an expensive process when you add it all up.

If you want to know more then check out this video I made recently to explain the true costs of professional drones and aerial work, otherwise happy flying!