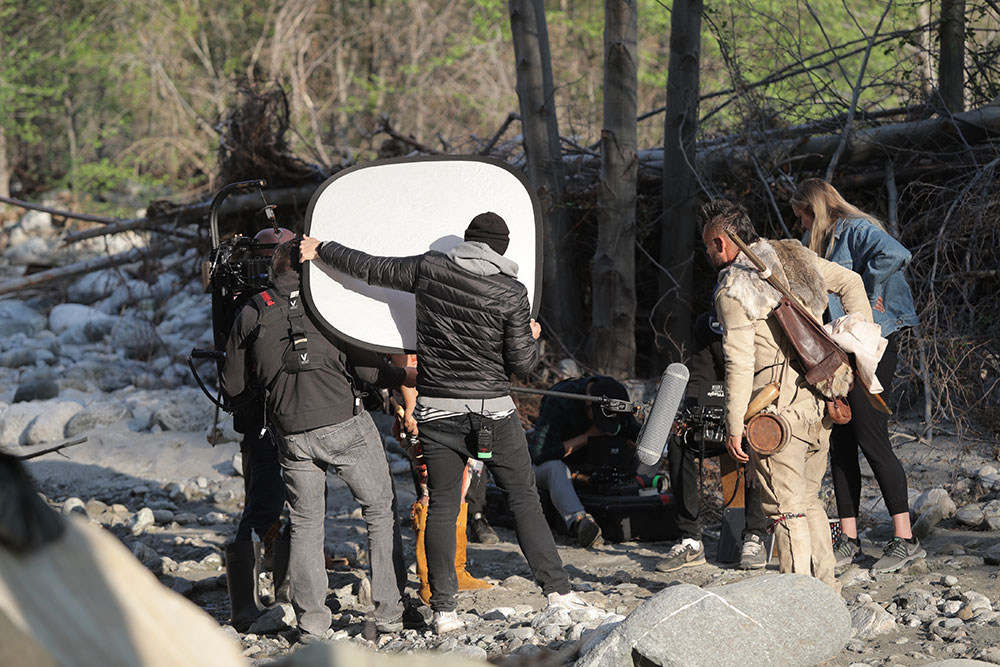 Starting work in the film industry can be both exciting and intimidating. There are so many new things to learn on a film set.

Making a film has a unique work ethic, etiquette, and even its own production language. Over the past hundred years, certain slang terms have developed during filming, these terms can alter depending on your country and region.

If you have never worked on a professional film set before, you might be uncertain about how a shot is called. Unlike popular belief on most film sets the Director does not shout ‘Action’  this is called by the 1st Assistant Director. The 1st AD is in charge of making sure that the film is shot on time, when filming is soon to commence they will indicate this with a series of calls that go as follows.

Last Looks – The 1st AD shouts ‘Last Look’s’ which lets the crew and cast know that the camera is soon to be rolling. It is the last chance for makeup to be checked, props to be placed and for the camera department to get set up.

Quiet Please – Often the 1st AD will shout ‘Quiet Please’ right before the camera turns over. This allows the atmosphere to settle down and for sound to get ready.

Action – When everyone is ready and recording the 1st AD will now shout ‘Action’. The scene will be performed and the Director will shout ‘Cut’. The only other time anyone else says cut is if there is a potential danger to the actors or major equipment failure.

The list below is a collection of film set terminology that’s widely used throughout the UK and can also apply to American film sets.

Apple Box – A wooden box used by the grip department. These boxes come in different sizes and are used to prop up or support lighting and camera equipment.

A.D.R – Automatic Dialogue Replacement, also called dubbing. Often during production dialogue can not be recorded clearly, and is pre-recorded at a later date.

Blocking – Rehearsing a scene with the actors on location. The director blocks the scene so that the camera positions can be decided based on the actor’s performance.

Call sheet – A list of the days work schedule and what time everyone is needed on set. Typically you will get the call sheet via email or print on the day before shooting.

Dailies –  Daily footage that has been roughly cut by the editor so that the director and film producer can observe how the film is coming together, also called Rushes.

Dolly – A dolly is a cart on a track that is used to create smooth camera movements. The camera is mounted on the cart and a dolly grip will push the cart back and forth.

End Board – When a scene is boarded at the end of a shot and not at the start. The board is also held upside down and a camera assistant will shout ‘End Board’.

Green – A  term used to describe people who are new to the film industry.

Green Screen – A special effect technique where a green backdrop is used to make it easier to add new backgrounds. This post-production process is called Chroma Keying.

Gate – The 1st AD will often shout ‘Check the Gate’ on set. The gate is the part of the camera that sits between the lens and the film. You check the gate to make sure there is no hair or dust on the film. This is also done when shooting digital.

Juicer – A Juicer is a nickname for an electrician, also called a Spark

Last Looks – A phrase used by the 1st AD onset, indicating the last chance to check actors and set equipment before the camera starts rolling.

Magic Hour – The hour before sunset when natural light is at its best and the sky is golden. Often the director of photography will want to film some shots during this hour.

M.O.S – Mute On Sound, if sound can not be recorded MOS is written on the camera board to inform the editor that no audio has been captured for this shot.

Pick Ups – Additional shots to be filmed at a later date. Shots are picked up later if they can not be filmed on the scheduled shooting day.

Unit Base – Where costume, make-up, catering and the casts trailers are all located.

Recce – Visting a location before filming commences. The director and the head of departments will do a recce of the locations before production begins.

Runners – A film runner is an entry-level job role in the film industry. Runners do basic jobs that require little training such as cleaning the set and making tea and coffee.

Sides – Script pages of today’s scenes to be shot, in shooting order, usually printed onto A5 paper. You will be given Sides at the start of every shooting day.

Scripty – The nickname for the script supervisor on set.

Squib – a small explosive device that is attached to an actor to give the impression of them being shot. The special effects technician will be in charge of these on set.

Talent – A nickname for all actors on set.

Video Village – The place where the monitor goes on set, getting its name from the number of people that stand around it (many of whom don’t have to be there).

You are likely to hear all of these terms used during your first week on set. It won’t take long before you are fully fluent in the production language. If you know of any other film set terminology you would like to add to the list let us know in the comments section below.