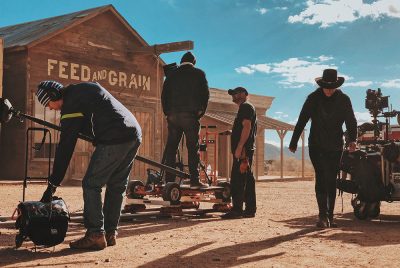 In this article, we break down various different film set jobs and how they relate to other departments.

Teamwork makes the dream work, and filmmaking at heart is a collaborative art. That is to say if you want to make a film you’re going to need a film crew.

And with so many film set jobs out there understanding them all and who does what will take time. So, to make things easier we have put together the following list of film crew job profiles for you to refer back to.

Art Director –  A high ranking job role in the art department. Their first main job is to break down the script and list what props and sets are needed. During production, they might supervise the set as Standby Art Directors. Larger sets will have Supervising Art Directors who will help keep track of the budget.

2nd Assistant Director – The second assistant director is in charge of the production office. They prepare the call sheet every day as well as communicate with the actor’s agents. They also have Office Runners to help them with errands.

Best Boy – A term used to refer to the gaffer’s right-hand technician. Best boys can be of any gender, and may also go by the title Assistant Chief Lighting Technician. The grip department may also have a Best Boy Grip, the gaffer’s lead assistant.

Camera Assistant – The term applies to several assistants to the director of photography. The Camera Operator is in charge of capturing the shots. The 1st Assistant Camera (aka Focus Puller) makes sure that all the shots are in focus. The 2nd Assistant Camera (aka Clapper Loader) is responsible for boarding each take. All camera assistants prepare and maintain the camera equipment during production.

Catering – The food and drink company or individual that has been hired for film production. Catering (aka Craft Service) is an essential part of having a happy crew.

Casting Director – They are in charge of hiring the cast for the film. Working closely with the director and producer, they hold auditions for actors. Casting Assistants help them run the casting office, for instance with admin tasks and calling agents.

Composer – During post-production, the composer designs the film’s original music. They work closely with the director as well as musicians to create the film’s score.

Colourist – During post-production, they design the film’s colour palette. They work with the director and director of photography to transform the films final cut.

Costume Designer – They are the head of the costume department. In pre-production they break down the script and arrange costume fittings. Overall they work closely with all visual departments to design and develop the costume style. During production, they are always on set. Costume Assistants help dress extras and both wash and repair costumes.

Director – The director is the film’s dynamic creative force, and arguably the most competitive film set job. They are responsible for directing the actors and the film’s overall visual style. In pre-production, they help cast the film and most significantly communicate the film’s creative style with the crew. In production, their main task is to direct the actor’s performance. During post-production, they work with the editor and producer to lock the final cut.

Director Of Photography – The head of the camera and lighting department. They are in charge of the film’s photographic visuals, including lighting design, camera shots and camera movement. In production, they work with the director to create the films look. In post-production, they will overlook the edit beside the colourist.

Digital Imaging Technician – Markedly known as the DIT in production. They help the director of photography with digital footage knowledge and quality control.

Editor – The editor cuts together the film’s footage bit-by-bit to create the complete film. Films are shot out of sequence and as such the scenes need to be edited together. They may work with several Assistant Editors, who help them label files and sync audio. On a special effects-heavy film there will be an additional VFX team.

Gaffer – They are the chief electrician on set and work closely with the director of photography. With their team of Lighting Technicians (aka sparks) they set up and control the film’s lighting. They are fully qualified electricians and have in-depth electrical knowledge.

Grip  – The head of the grip department is also called the Key Grip. The grip is in charge of anything that the camera attaches to. For example tripods, dollies, cranes, and jibs. They also play a major part in set health and safety on set.

Line Producer – The line producer is the producer’s right hand man. They are in charge of hiring crew and the on set logistics. During production, they keep track of the film’s budget, problem solve and help keep the film on schedule.

Locations Manager – They are in charge of sourcing and securing permission for the film’s locations. Along with Location Scouts they negotiate with location owners. During production, they make sure there is parking, power sources and catering.

Producer – The producer is often the first person on a project, they source the screenplay and find funding for the film. With the most responsibility, they are often the highest-paid crew member. Firstly they might work with a Development Producer to help them source a screenplay. Then they hire the initial production team. The producer works until the film is complete and in the distributor’s hands.

Production Accountant – Films cost a lot of money to make. On large sets, there is an accountancy department and Cashier to keep track of the film’s budget. The production accountants are qualified accountants who have in-depth knowledge of the film business and its financial regulations.

Production Designer – The head of the art department. They work closely with the director and director of photography to create the visual world in which the story is set. They start work in early pre-production researching and hiring their department team. During production, they communicate with their team and other creative departments to create the film’s look from set design to colour palette.

Production Coordinator – They are in charge of the production office when the line producer is on set. That is to say, they complete admin and organisational tasks.

Production Manager – An additional member of the producer’s production team. They are the line producers lead assistant and help them with budget breakdowns. On a large set, they may be in charge of crewing up and looking after second units.

Runner – This is the most junior entry-level job role. Runners (also called floor runners or production assistants) can work under any department. They complete any basic task given to them from ordering food to driving actors to set.

Set Designer – The set designer works alongside the production designer to build sets. They begin by creating technical drawings to act as templates. On large shoots, they will work with a team of carpenters and construction staff.

Screenwriter – A screenwriter writes the film’s screenplay. They do this either based on an original idea or by adapting an existing story. They can work alone or as part of a writer’s team. It’s the produce who typically finds and buys screenplays.

Script Supervisor – The head of continuity on a film set. Films are almost always shoot out of sequence. They track any changes making sure the footage cuts together smoothly.

Sound Mixer – The sound mixer is the head of the sound recording department. They are responsible for recording the dialogue and atmosphere during a film shoot. The sound mixer works with the Boom Operator (aka first assistant sound) and other Sound Assistants during production.

To sum up, if you find yourself confused about film set jobs don’t panic. It takes time to fully understand everyone’s role and responsibility on set.

In reality, many filmmakers learn as they go, but you can always bookmark and refer back to this guide.

If you are hiring we also have a film crew section where you can find top-quality freelancers. What job role are you most interested in learning more about? Let us know in the comments.