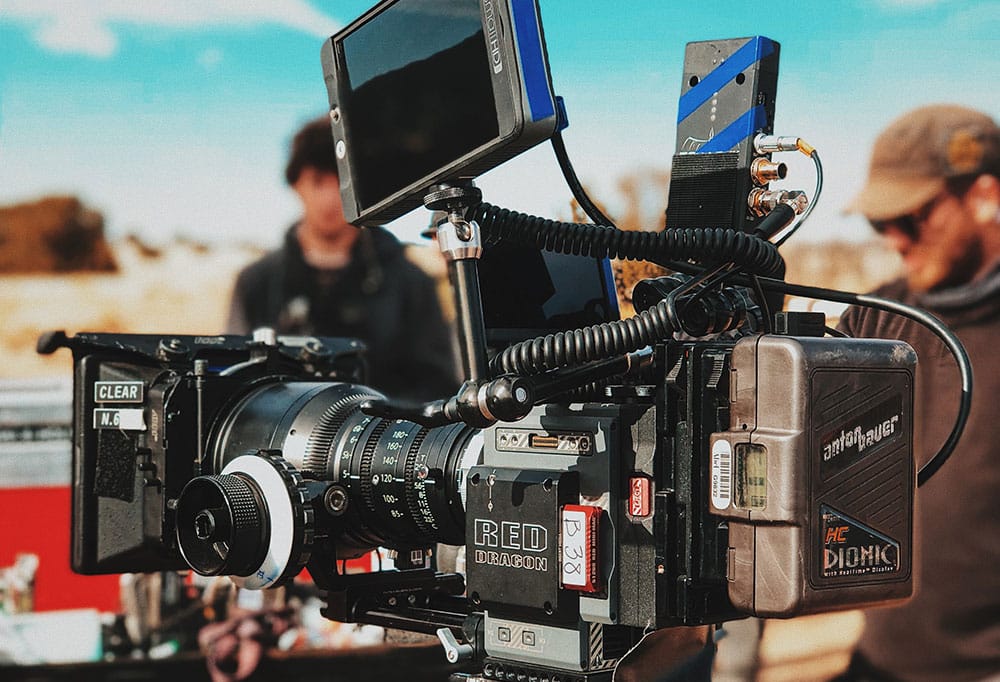 Unsure what job role you want in the film industry? Or maybe you are stuck on who does what. There are hundreds of job roles to choose from if you want to become a filmmaker.

Firstly, it’s important to understand them all and their individual responsibilities. But don’t worry too much; when working on a film set you will quickly learn the ropes.

Nevertheless, in order to help you, here’s a comprehensive list of film crew roles from development to distribution.

Producer – The producer is often the first person on a project; they source the screenplay and find funding for the film. With the most responsibility, they are often the highest-paid crew member. The producer works until the film is complete and in the distributor’s hands.

Director – The director is responsible for directing the actors and the film’s visual style. In pre-production, they will communicate their vision with the crew. During filming, their main tasks are to direct the actor’s performance and give instructions to crew members. Finally, in post-production, they work with the editor and producer to lock the final cut.

Development Producer – A large production company might have an in house development team. Development producers help find stories and scripts to be made into films.

Screenwriter – A screenwriter writes the film’s screenplay. They do this either based on an original idea or by adapting an existing story. They can work alone or as part of a team.

Script Reader – Script Readers work for companies. They read, analyse, and create coverage reports which give feedback on the screenplay for both screenwriters and producers.

Researcher –  In some historical and fiction films, researches assist with story accuracy.

Casting Director – The casting director is in charge of finding and hiring the cast for the film. They work closely with the director and producer in pre-production.

Line Producer – The line producer is the producer’s principal assistant. They are in charge of hiring crew and the set logistics. During production, they keep track of the budget, solve problems, and help keep the film on schedule.

Secretary –  Helps with administrative assistance in the production office.

Finance Controller – They oversee the legal and financial management on set. On large film sets, an accountancy team will keep track of the budget throughout production.

Production Accountant – Production accountants, are qualified accountants who have in-depth knowledge of the film business and its financial regulations.

Cashier – The Cashier will assist accountants and help keep track of expenses and spending.

Locations Manager – They are in charge of sourcing and securing locations on set, as well as organising recces with crew members. Making sure Locations are accessible and safe to work within.

Location Scouts – Scouts assist the location manager and negotiate with location owners. The scouts make sure the locations have permits, parking spaces and power sources.

Parking Co-ordinator – Oversees crew parking, setting up of base camp and safety.

Locations Runner – Helping with basic tasks, such as cleaning location sites after use.

2nd Assistant Director – The second assistant director is in charge of the production office. They prepare the call sheet every day as well as communicate with the actor’s agents.

Production Designer – The head of the art department, working closely with the director and director of photography to create the film’s visual world. Production designers start work in early pre-production and communicate with all creative departments on set.

Art Director –  Art directors complete a script breakdown listing what props and sets are needed. In production, they oversee the art department.

Construction Manager – The construction manager looks after studios and sets. They hire carpenters, painters, scenic artists, and riggers to help them build sets based on the production designer’s drawings.

Set Designer – The set designer works alongside the production designer to build sets.

Set Decorator – Decorators are in charge of dressing the set with props and furniture.

Prop Master – In charge of sourcing and looking after all props in the film.

Costume Designer -The head of the costume department, in pre-production, they breakdown the script and arrange costume fittings. Overall costume designers work very closely with all visual departments to design and develop the costume style.

Costume Supervisor – In charge of the wardrobe and help look after clothiers during production. A critical responsibility of theirs is to pay attention to costume continuity.

Costume Standby – On set standby, checking the costumes before and during takes.

Costume Runner – Assist with basic tasks, such as ordering and returning costumes.

Makeup Artist –  Makeup artists are in charge of all makeup design and makeup continuity.

Hair Designer –  Hair designers are in charge of all the hair design and hair continuity.

Assistants – Depending on the scale of the film, there maybe be a large team of hair and makeup artist assistants during production.

Runner – Assist with basic tasks, such as cleaning the makeup room.

Director Of Photography – The head of the camera and lighting department, they are in charge of the film’s photographic visuals, including lighting design, camera shots, composition and camera movement. In production, dop’s work very closely with the director to create the films look. In post-production, they will overlook colourist and edit.

Camera Operator – In charge of camera operation, there may also be a Steadicam operator. All camera assistants prepare and maintain the camera equipment during production.

1st Assistant Camera (Focus Puller) – The 1st AC makes sure that all the shots are in focus.

Digital Imaging Technician – Known as the DIT in production. They help the director of photography with digital footage knowledge and overall quality control.

Data Wrangler – The wrangler transfers footage from the camera to the hard drives.

Camera Trainee – Help with basic tasks, such as marking the actor’s positions in rehearsal.

Script Supervisor – The head of continuity on a film set. They track any changes making sure the footage cuts together smoothly. The script supervisor mainly works in a department alone, but on large productions, they may have assistants.

Key Grip  – The head of the grip department also called the Key Grip. The grip is in charge of anything that the camera sits onto or attaches (for example, tripods, dollies, cranes, or jibs). And also play a significant part in set health and safety on set.

Best Boy Grip – The grips principal assistant, in charge of looking after, renting, and hiring equipment. Best boys can be of any gender; one of their main tasks is completing a risk assessment.

Grip Trainee – Helps with basic tasks, such as putting equipment away when not needed.

Gaffer –The chief electrician on set and work closely with the director of photography. Gaffer’s are fully qualified electricians and have in-depth electrical knowledge.

Best Boy – A term used to refer to the gaffer’s right-hand technician. Best boys can be of any gender, and may also go by the title Assistant Chief Lighting Technician.

Spark – An electrician on set, in charge of setting up and looking after the lights.

Genny Operator – The name for the person who is in charge of setting up the generators.

Lighting Trainee – Assist with basic tasks, such a holding lighting stands for safety.

Sound Mixer – The sound mixer is the head of the audio recording department. They are responsible for recording the dialogue and atmosphere during a film shoot.

Boom Operator – (aka first assistant sound) In charge of recording sound with a boom. A boom is a microphone that is attached to an extendable and adjustable pole.

Sound Trainee – Helps with basic tasks, such as labelling sound files for the editor.

Editor –The editor cuts the footage together bit by bit to create the film. Editors work closely with the director and producer to create a final cut. Depending on the scale of the production, the editor might work with a team of edit assistants.

Post-Production Supervisor – Supervisors oversee the entire post-production process. They communicate between the editor, producer, and sound editor to get the film made on time.

Assistant Editor – There may be several assistant editors working alongside the editor. Helping with tasks such as labelling files, syncing audio, and preparing assemble cuts.

Colorist – The Colourist’s job is to design the films colour palette. Colourist’s work with the director and DOP to enhance the film’s visuals before the final cut is processed.

VFX Supervisor – They work between the producer, editor, and VFX studio. If the film needs visual effects, they will hire a specialist VFX company to complete this work.

Sound Designer – The Sound Designer is responsible for all sound in the film (for example, dialogue, ADR, and background noise). They help mix and complete the film’s soundtrack.

Foley Artist – Foley is the reproduction of sound effects that enhance the film’s audio.

Composer –The composer designs the film’s original music. They work closely with the director as well as musicians to create the film’s score.

Sales Agent – Agents are hired by producers to sell and negotiate film deals with a distributor.

Distributor –The film distributor is responsible for the marketing of a film. They work for a distribution company and are in charge of selling the film to exhibition platforms.

Publicist – Also known as PR, their role involves working with journalists to create a buzz around the film. Publicists will get the film reviewed, organise press screenings and interviews.

Marketing Manager – They design marketing campaigns to make sure the film reaches the widest possible audience (for example, trailers, commercials, billboards, and social media strategy). To help them, they may have a large team of marketing staff and assistants.

Film Programmer – Programmer’s work for platforms such as – festivals, cinemas, television, or VOD. Their role is to purchase films from distributors that are a good match for their audience.

Film Exhibitor – Exhibitors work for or own platforms that show films to an audience.

In summary, this list includes the leading job roles that you will find in the film industry. However, there are a few other roles that have not been listed, such as the VFX team.

On major film sets there will also be more than one person per job role and numerous more assistants. The scale and budget of the production will determine how many names there are on the films closing credits.