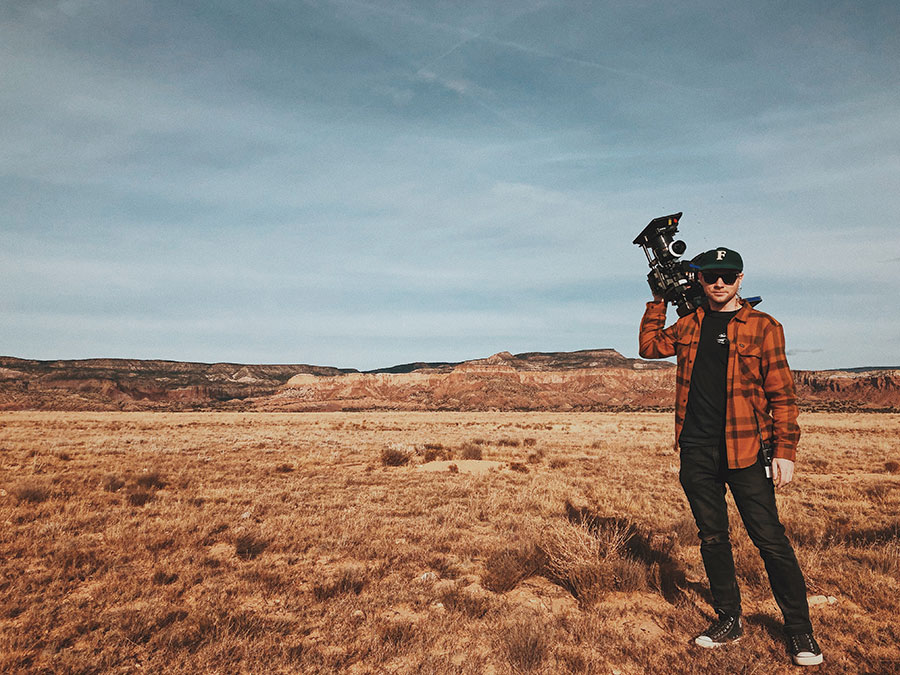 Wouldn’t it be cool to make a travel film like the one below? It may look impressive, and that’s because it is, it really is, but it is also very achievable if you have the patience to learn and the drive to get out there. To help you on your way to making your incredible travel film here are some tips to pay attention to before you book your flight!

Top 5 Bits of Kit To Bring

The big question is, what gear to bring? Travel filmmakers are one of the few groups of creators that seem to agree about what is important when it comes to buying equipment; buy light and buy smart.

The Canon 1DX ii was a hugely popular camera for content creators and understandably with its beautiful imagery and epic battery life, but at what cost? Let’s face it, do you really want to be carrying a massive, heavy and expensive camera in your travel bag that doesn’t even shoot log?

Mirrorless cameras have overtaken the DSLR market in recent years and with good reason, the Sony A7iii seems to be the perfect travel film camera.

You want to cover all bases with your lenses, which means having an arty prime lens for when you have some time on your hands, a far-reaching zoom lens for when you don’t, and a wide lens with a small minimum focus length for all those moments you are crammed into tiny spaces. I personally use the SLR magic 50mm prime lens as it is super small and yet incredibly tough with its anodised casing, stops down to 1.1 for all those low light moments and gives a lovely bouquet at a fraction of the price of the larger and more delicate canon L series 50mm.

For a zoom, I take the 24-105mm f4, but anything of this range will cover you, just try to find one that is image stabilised. Using a zoom lens will be your choice when you are expecting to be rushed, so having something that is working with you to capture a stable shot will be a godsend when you get to the edit. Some people prefer to take the 24-70mm for the f2.8 but the reach isn’t quite enough for my shooting style, but each to their own! If you plan on shooting lots of wildlife you may prefer the 70-200mm, just bear in mind its weight and length.

Lastly, taking a wide lens such as a 16-35mm or even wider will give you that ability to portray a sense of acceptance and intimacy with any people shots, get you great landscape vistas and allow you to shoot even in the tightest of spaces.

Get a gimbal that has its own stand as well, and you now have cinematic smooth shots walking through the jungle, a moving motor for that nighttime time-lapse or even just a tripod if you plan on interviewing someone. Some of the new gimbals do incredible things with the Ronin S leading the way with its infinity spin and weight capacity. When buying a gimbal remember to factor in the weight of a lens, ND filter and microphone.

Don’t forget a microphone! People always overlook this, but the sounds of adventure are just as important if not more so than the visuals. It doesn’t have to be glamorous, but some sort of top mic will go far to pick up that ambience of wherever you are. It does cause hassle when looking through the eyepiece and adding gimbal weight, but I personally believe it’s worth the hassle to give an authentic experience in the sound design. Check out our article on the best microphones.

Be INCREDIBLY careful about which country you are taking your drone, as some countries will see it as journalism and could land you in jail for years, it’s simply not worth it. But if it’s a green light, then taking something like a DJI spark that doesn’t take up too much room but will get you that huge reveal of the landscape is definitely worth it. Check out our article on the best drones to help you decide which one is right for you.

Buy a variable ND for your largest lens, and then cheap step up rings for all the other lenses because without a variable ND there is almost no point in taking the rest of the gear. You can use FPS, your aperture and even shutter controls in a pinch to gain exposure, but don’t underestimate that African sun if you are planning on shooting faster than f/6.3.

There may not be power supplies everywhere you go, so taking one plug that gives you multiple outputs may be the difference between a good day and a terrible one. Even if you have the brilliant battery life of the A7iii, always charge as many batteries as you can each night because you never know when the next chance might come.

The neck strap is often the first thing to go when I buy a new camera, but if you don’t want to take a gimbal or a bag with you on that morning hike, then with a bit of practice you can use a strap and some arm tension to replicate a gimbal movement and move in a far less restricted way

Backing up footage is of course the big one. I like to take enough cards that I never have to format them and I can slip them into a small SD Card holder that stays with me at all times. However, if you are planning on taking a laptop then a portable hard drive would be the way to go.

Shoot everything! ‘More is more’ in a travel film, you want as much to play with in the edit as possible (I’ll get to that later). Whilst you want to make sure you take the time to enjoy the trip through your own eyes and not just through the camera, if you want a sick film to put on YouTube once you’re home then you will want to have plenty of content to work with.

A good travel film is made up of ½ amazing landscapes and ½ moments of humanity. What happens when you think ‘I won’t bring my camera on this climb’ and then you get to the top to see a beautiful sunrise and the tears roll down your fellow adventurer’s cheeks? You will kick yourself, trust me. The only exception is travelling in cars, sure pick up a couple of shots in slow motion driving past if you can, but if you’re going down the bumpy roads of Madagascar then you’re more likely to damage your camera and waste your battery life.

You’re wanting to give the viewer a flavour of the country, the culture, the adventure, so give them that by capturing every part of the experience you can. A culture is made up of the colours in the buildings and landscapes as much as the smiles and laughter on the faces of those who live there, but it is also the sounds that transport you to a different place, think how different London sounds to Mumbai.

So now you know you need to film everything and you have all the gear to do it, the question is how are you going to shoot it all? Shooting cinematically isn’t as easy as hitting record and walking with your camera.

The two key factors of epic travel film shooting are:

Very rarely will you see a travel film that has a lot of stillness in it, in fact, many travel filmmakers don’t bother bringing a tripod at all (unless you want to do hyperlapses the old-fashioned way). To get that sense of journeying the camera very rarely stays still. That doesn’t mean everything has to be an elegant gimbal shot going through a doorway though, in fact sometimes the rapid handheld movements are what give pace and dynamic action to the film. If you can find a camera that autofocuses in video (such as the a6300 with a native lens) then you can get even more experimental with handheld movements.

If you plan on editing your travel film like Watchtower of Turkey then you may also want to consider starting and ending each shot with a quick whip pan or tilt, maybe even a spin, because even though there are plugins to help achieve this editing style now, it may just enhance it or save you even needing to bother with plugins.

Variety is the spice of life as they say, and that is true cinematically as well, no one wants to see head height mid-shots all the time. Mixing your shots up in both focal length and composition will make your film come alive; get close to your action on a wide lens to achieve a really intimate feeling or punch in tight on a zoom lens to give off that ‘outsider’ perspective, and then get those epic wide shots of the landscape or low tracking shots through the grass. Mix. It. Up.

All of this will serve you well, but if you can also capture a mixture of light by shooting at different times of night and day, you will get a range of colours and shades which will make the grade ten times more interesting to the viewer. Never be afraid to try something quirky, and even if you don’t think it has worked don’t delete it, sometimes the worst shots make the best transition shots.

So you’ve got all your footage back safely, you’ve looked through it all and catalogued the good and bad bits, now to tell a story…

A good travel film is meant to entice you and lead you into this mysterious new world, so structure your film in that way in both the shot selection and pacing. Maybe you want to launch into it with an almighty waterfall, or gently lead us in through an unused building, but either way, draw us in.

Sound design is what separates a nice travel film from the incredible and awe-inspiring ones, so factor that in and don’t be afraid to let moments play without music.

But of course, the thing you really want to know is how to do the sweet-ass transitions right? Well if you want to cheat then download Chung Dha presets, but for a more authentic, albeit time-consuming process, then watch this video that explains it better than I ever could.

The last point, stay safe. Don’t flash your gimbal in dodgy areas, don’t climb the side of the building for that one shot, and make sure you are packing your batteries in your bag in line with airline policies. Good luck!