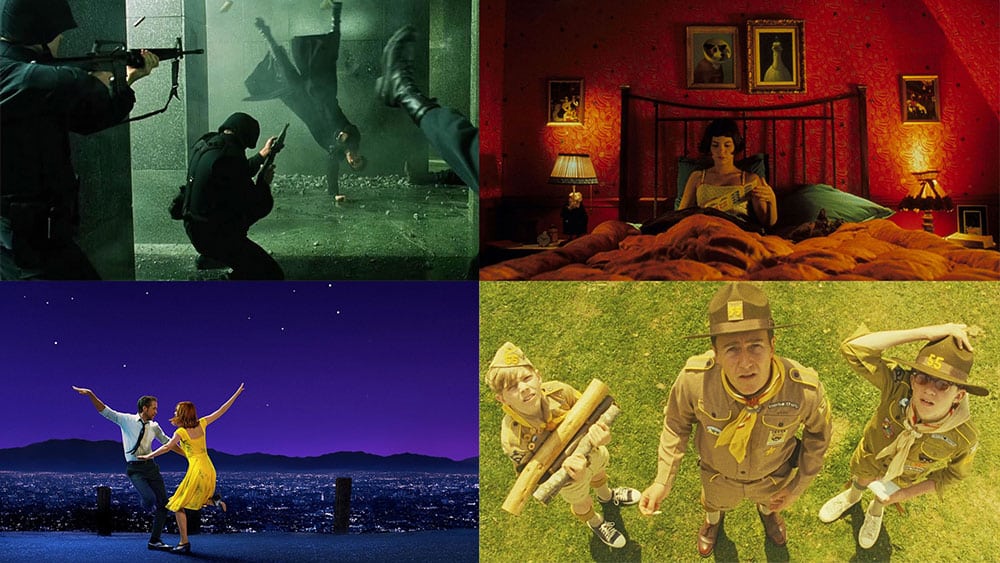 How to Create a Movie Colour Palette [Step-by-Step Guide]

A movie color palette helps create the tone and mood of the story. Have you ever watched a film and noticed that it has a distinctive look? For example, consider green in The Matrix (1999) or yellow in Kill Bill (2003).

These are intentional design decisions made by the director, DOP, and other visual departments during pre-production.

Understanding how and when to use color in your films will make you a better filmmaker. So, we have created an in-depth guide on making a color palette using the films of Wes Anderson as examples.

What is a Movie Colour Palette?

Initially, there was no color during the early stages of filmmaking, only black and white. However, some filmmakers still tried to create color by painting directly on the film reel.

By doing this, they would make a hue effect that would enhance the emotion of a scene.

So by the 1950s, when color film was available, it was well-known that color was an important tool for enhancing a story.

How Does It Work?

Firstly, there is a strong relationship between color and emotion. We are made to have different reactions when we see colors. For example, a blue shade can calm us, and red can cause anxiety.

Another example is a dislike of blue colors in foods as humans have evolved to avoid eating certain colors in case of poisoning. 🤢

These are both mental and cultural effects built in our brains. As a result, we can use them to help create emotion in a scene.

Then there is a color wheel which is a collection of color hues around a circle. Basically, it shows the relationships between primary and secondary colors.

On the wheel, the colors on the opposite side contrast vividly against one another. So for example, if you want to make a character stand out, you can put them in a red coat against a green background.

Most importantly, the film’s genre and the filmmakers involved will determine the color palette to use. So it’s typical to decide on a handful of colors and use them continuously throughout the film.

Firstly, there is no filmmaker that has a more iconic movie color palette than Wes Anderson. You could take a frame from any of his films and you would know who made it.

Wes Anderson’s colors tend to be more pastel tones with featured pinks, yellows, and pale blues. As a result, these colors and his symmetrical framing make him a unique director with a distinctive style.

In Wes Anderson’s most famous film, every character has a color dedicated to them. Chas, who is angry, always wears his iconic red Adidas tracksuit. Whereas Margot, who is sad, always wears a pale blue dress, fur coat and eyeliner, even during flashbacks of her as a child.

In addition to this, the film has a washed orange tone giving it a warm, sentimental look.

The Wes Anderson colors in this film are blue, yellow and orange. In addition, the film color palette in every scene has a pale yellow hue. As a result, this adds to the film’s youthful tone, which focuses on the life of two children in the 1980s.

Also, because it’s set in the past, this tone also makes the film feel timeless and nostalgic.

In the Grand Budapest Hotel, perhaps his most stylish of films, there is a real mixed color palette with pinks, blues, reds and, purples. Colour contrast is used widely throughout the film, for example, the red hotel walls against the purple jackets of the staff.

Also, the hotel location is an escape with its dreamy colors compared to the stark blue and white of the real world.

Looking for more examples of Wes Anderson colors? Check out this great video from Studio Binder.

When it comes to choosing a color palette for your project, it pays to give it some thought. One way to get started is to create a mood board. It’s an easy way to collect some images together that represent the feeling of your movie. Here is a quick breakdown of the full process.

Firstly, during early pre-production, the director and head of departments will have meetings. In these meetings, the director needs to share their creative vision. To do this, they will create:

You can either pick a color hue for the whole film or select a color for each location and character. Once everyone is on the same page, the pre-production planning can begin. This includes the following:

Throughout this process, all departments keep an eye on the movie color palette and keep it consistent.

Secondly, during production, each visual department, will all think about the use of color. This could mean changing an actor’s costume if it doesn’t fit their character or using color lighting to create a mood. On a film set, the color palette is a team effort between the following crew members:

Lastly, in post-production, the color in each scene is enhanced with color grading. This is when you alter levels, curves, tones and shades of colors in each shot.

This might be a quick fix such as changing the color of an object or it could be adding a certain hue in every shot to give the film an overall cinematic look.

So when you think about it, color is a very important part of making a film. It covers all aspects of what is on screen, and many directors and DOPs take the color theory very seriously.

Here is another quick video from The Cinema Cartography about the importance of color in storytelling.

In short, the color palette can completely change the tone and mood of a film. All visuals play a part in telling the story and creating the entire world of the film.

Next time you watch a movie, consider that every color is a deliberate choice. Ask yourself these questions: