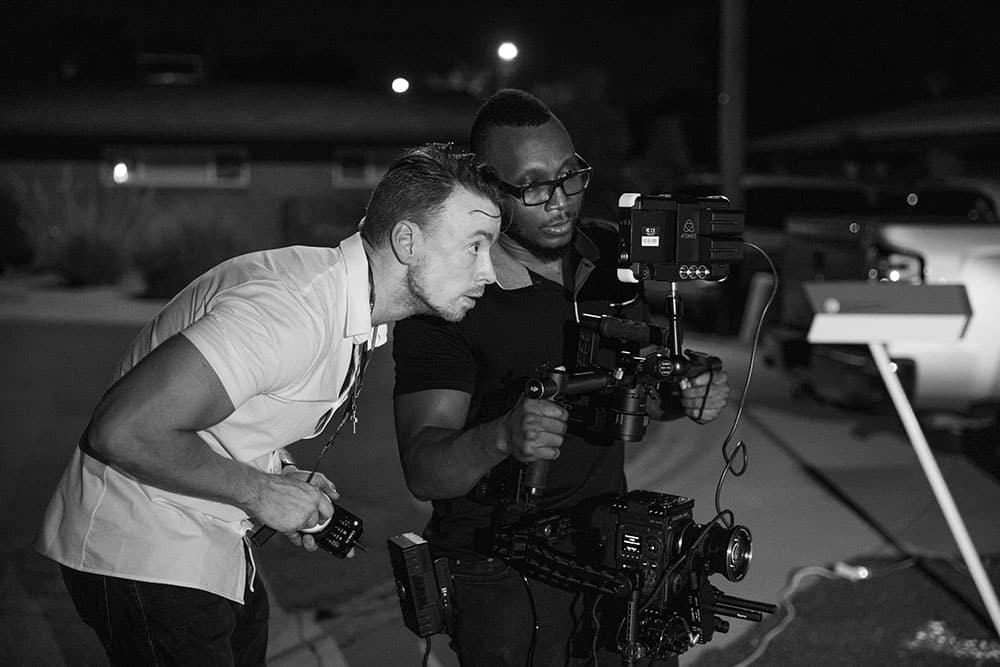 Film director jobs are highly competitive and hard to find. That is because most directing work comes from who you know, aka networking. It will take years to build up the contacts you need to find work solely from recommendations. Until then, there are other ways to find work such as online job boards.

In this post, you will learn about the types of directing jobs, finding work, and applying to jobs correctly.

When you think of a film director, the first image that comes to mind is a Hollywood film set. Except this is only one of the many types of directing jobs available. And this is a good thing too, directing is the most competitive job role in the film industry. So, it is helpful to have an open mind about your film career and understand all of your options.

As well as, film studio jobs, directors work on independent films, commercials, TV and online videos. They are even hired in the games industry and for event work. So the skills you have as a film director are valuable throughout creative industries.

Many directors start their careers making short student films. They then branch out and find a speciality. However, you might find it easier to have a career by working a mix of job types. For example, a film director that makes commercials, music videos and shoots drama.

Where can a film director work:

Before you can start searching for film director jobs, you will need to develop your skills. First, a film director needs to know everything about the film production process. This includes understanding everyone’s job role on set and communicating your vision to others.

One way to learn these basic skills is to attend film school. It’s not essential to get higher education in filmmaking, but it might be worthwhile. Another way is to work on independent film sets or make your own films.

When you apply for directing jobs, producers will want to see previous work. If you apply for commercial work, you will need to show that you can shoot in this style. Also, it helps to have previously worked within the same genre. For example, documentary directors should have made documentaries before, even if only short films.

You will need to have a portfolio of work and plenty of work experience before pursuing a film career. Film directing, in particular, is highly competitive, so it will take a while to become trusted in this role.

What skills does a film director need:

There are two main types of film industry jobs, full-time and freelance. First, the majority of creative film crew work is freelance. This means that you find your own work and file your own taxes. The second is full-time contracted work which is similar to an ordinary day job. This type of work is mainly within TV, commercial, film studio jobs and marketing.

You can find full-time film director jobs advertised online on popular film job boards like ours. For full-time work, you can also search the career pages of film production companies.

For freelance film crew work, you might have more luck with social media and Facebook groups. Producers who don’t have enough contacts will advertise crew roles online. This will often be below-the-line work, but sometimes film director jobs are posted.

There is no doubt that networking is the most common way to find film work. People like to hire who they already know and trust. So, you need to work within the film industry and network. To do this, make films, work on independents and attend film events like film festivals.

When you find a film director job, you should take your time reading the application instructions. Full-time work often asks for you to complete an online questionnaire and attach a filmmaker CV. A freelance job might ask for specific work experience and a showreel. For example, a commercial might ask for a director who has previously made commercials and to send over a reel.

Another important part of the application process is to create a portfolio. This is an online portfolio website with clips of your previous work and an IMBD link (or a list of credits). The work you submit must be within the quality of what you are applying for. For example, you will need to show you can work with a high budget for film studio jobs.

What you need to apply for work:

How much you get paid as a film director will depend on two factors. First, the production budget – you will get paid more on a high-end film. Second is your experience, you can increase your wage with every year you work. What type of production you work on will also play a part. For example, TV commercials pay more than online videos.

Your union and agent will also help you decide on a salary. The main film unions for UK based directors are Bectu and Directors UK. These can help you decide your pay rate per project and also provide film career advice. When you have enough experience and start to work towards high-end work, you will benefit from having an agent.

We have also put together a helpful production crew rates guide!

Film director jobs are hard to find because producers like to hire people they know. So, to find consistent work, you will need to build up your skills and network in the film industry. You also need to create a portfolio that showcases your talent within the style of work you are applying for. It will take a long time to make a film career, however, it is possible with patience and commitment.