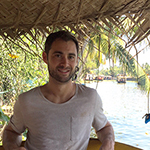 I shot, directed and edited this no budget music video for NUDES to show case their new single.
View finished film at https://vimeo.com/115985459

July 2013-October 2013 Everything Is New Documentary

• Cut and graded a 12 min doc from 100s of hours of footage, shot in an orphanage in India, to raise awareness of the charity and the music album they had created with the children of the orphanage and renowned artists including Jarvis Cocker and Four Tet.
• Film was used for a feature on popular music site pitchfork.com.
View finished film at https://vimeo.com/77170582

July 2013 The Aura with Tilda Swinton

Edited a short promo in the style of a documentary using real children from the streets of India, Africa and Mexico to raise awareness of the issues these children face and the aid workers who help them.
View finished film at https://www.youtube.com/watch?v=X-SkghlHhUY

* Worked alongside in house creative team on a range of edits for online, social media and in-store.
* Worked directly with directors and videographers commissioned by M&S to edit footage consistent with M&S brands
* Developed specialist skills in creating films for digital signage including bespoke signage solutions housed at M&S in a range of unusual formats
* Worked alongside external media and technical agencies to develop content solutions for new in-store concepts that stray from traditional 16:9 ratios, advising on how creative aspirations can be maintained within constrictions of bespoke formats.
* Supplied digital signage edits for flagship stores across both M&S’s UK and international estates including working alongside creative team to supply content for their digitally award winning Amsterdam store
You can view an example at https://vimeo.com/75290835