Home » Blog » What Is A Key Grip? Essential Career Guide 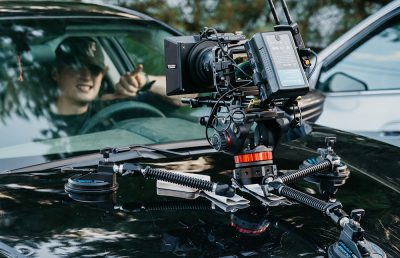 What Is A Key Grip? Essential Career Guide

In this article, we look at the role of the key grip and grip department. It’s essential to understand the fundamentals of every job role on a film set.

One role which you might not already know about is the key grip. The grip works closely with the DOP and camera department. They are skilled technicians on set, above all responsible for providing camera support and safety.

Below we have broken down the position of the key grip in detail. Also, check out our other film career guides for information on different production roles.

What Is a Key Grip?

The key grip is a skilled film production crew role. On large UK productions, the key grip is the head of their own department. Whereas, on smaller film sets, you might find them placed within the camera department. Furthermore, on US sets their role also involves lighting rigging and general stagehand work.

For example, if you want to mount a camera on a helicopter. It is the grip that will source the equipment, mount it and check that it is safe to use.

Like all crew roles, the key grip in film is a self-employed freelancer, which means working project to project on short term contracts. The work will also be physically demanding and require extended work hours. Although the job was traditionally only done by men, the role is opening up to female grips.

To begin with, the line producer or DOP will hire the key grip. Their first duty will be to complete a script breakdown and discuss camera movement with the DOP. The grip will also attend various technical location scouts.

It is the grips responsibility to decide what equipment to rent for each scene. Then they will order the kit, and organise how to transport it to the set. On large film sets the grip will hire a team of assistants for the key grip department. Lastly, they must do all of this within the producers budget.

During production, the key grip in film will always be on set aiding the DOP. They will watch the director’s scene blocking and set up equipment for each shoot. As we have said, the grip might hire assistants to help them with specific duties. For example, the dolly grip is in charge of setting up and pushing the camera dolly.

Seeing that the grip works with a lot of heavy and expensive equipment. They are responsible for film set equipment and general safety on set. Additionally, a key grip in film can cut a shot if they believe there is potential danger within a scene.

Although you do not need formal education, a degree in film may help you understand more about the filmmaking process. You can also apply for on the job training as a grip trainee or apprentice. You can find placements through companies such as Screenskills, BBC, PACT and Creative Assess.

Alternatively, you could work on independent and low budget film sets for the experience. Once you have built up your skills and contacts, you can begin to apply to larger productions. It might also be helpful to gain a health and safety certification.

Above all, key grips are problem solvers and team players. They need to work closely with the DOP and give clear instructions to their team. You will need to build up physical strength and stamina to lift heavy equipment.

In the key grip department, many grips will have started their careers as grip trainees. You can work your way up the ranks until you build trust as the key grip. Working at a film rental house is another way to provide you with equipment knowledge. The UK union Grip Branch might be able to help you advise.

Finding that first job in the film industry can be especially difficult. Many filmmakers begin their careers by working on student and low budget films. Making your own film can provide you with basic knowledge of the film production process.

The key grip job role is almost always freelance and self-employed. This means that you will negotiate your pay rate per project. However, unions such as BECTU and Grip Branch can provide pay rate advice. Typically, you would start on the lower wage and work your way up to more responsibility.

Your salary will also change widely with the production budget. On major feature films, a key grip will make £350-£450 per day. However, on lower budgets, this will go down to £250 per day.

Curious to know what other crew jobs role salaries are on film and television sets? Then check out our updated chart of film production crew rates.

The grip department might provide an alternative career route for those interested in film work. This creative, physical and collaborative role might be a good fit for you.

Do you have any questions about the grip department? Let us know in the comments section below.