Why Audio Design Is Important For Video Editing

In this article, we look at the importance of sound design and audio production during the editing stage.

We all know how crucial post-production is in the filmmaking process. It’s where your vision comes to life and where the story is constructed. Undoubtedly, weak post-production will guarantee a bad video.

Within post-production, there’s audio design. Aside from the visuals themselves, audio production may just be the most important part of the whole post-production process. Indeed, it seems like a relatively simple, easy thing. However, it’s often overlooked. It can bring so much more to your filmmaking.

Below, we’ve laid out exactly why audio design is so important for video editing and why you should be paying more attention to it.

Firstly, when we go to the cinema or watch a YouTube video, what are the senses we’re using? Sight and sound.

So, while the visuals we see on-screen deliver certain information, there is a lot more information that is simultaneously being conveyed through the audio design.

In short, good audio production will always service the audience with extra information. It may be really subtle. For example, adding in small things such as;

This reminds your audience of exactly where they are.

In addition to this, it can also help indicate how an audience should be feeling. For example, in The Lord of the Rings (2001), Frodo wakes up in a large bed with golden sunlight pouring in. It looks peaceful.

Additionally, the sounds of tweeting birds, the distant flow of water and a very calm, gentle ambience fade in. Immediately, we feel relaxed and understand that the character in this scene is in a very safe and calm environment.

However, if we switch to Dunkirk (2017), we find the opposite. As the German bombers descend on the beach, there’s a tense, rising drone that gets louder and louder alongside the ever-increasing noise of the aircraft. The louder the noise, the closer to danger the soldier is. Subsequently, the environment here is uncomfortable, tense and threatening.

In fact, some cinema-goers complained that certain sounds in Dunkirk were so loud they were almost unbearable. The audio design of war is not kind.

Similarly linking into this concept, good audio design helps with the flow and pacing of the video. When Frodo is waking up, a relaxed ambience confirms the slow feel of this scene. Alternatively, on the beaches of Dunkirk, a rising drone and ever-present ticking clock that builds up over time create suspense and anticipation, leading to a particular climax.

Therefore, the audience can’t get too comfortable. The audio design confirms the scene as something that’s tense and frantic.

Furthermore, you may want to use certain drones to indicate the slowing down of time when using slow-motion footage. Meanwhile, when creating a time-lapse, a ‘rushed’ sound effect like a ‘whoosh’ can indicate the speeding up of time and the passing of many things, such as cars and traffic.

We highly recommend checking out this brilliant audio production tutorial from YouTube travel filmmaker Bryn North. He explains this concept in great detail!

In summary, all of this work on your audio production is helping your audience’s viewing experience. It’s making it better.

Essentially, that’s what audio design is all about. You’re adding in layers of information. Consequently, you have more depth in your film. Things are being brought to life.

If you watch a clip from any nature programme in a rainforest, notice the ambience and the sounds of nature? Now rewind the clip and play it on mute. Certainly, the visuals are still there and remain the same, but the viewing experience has been tremendously lessened. There are plenty of examples in this episode from Netflix’s Our Planet (2019).

Scrub through the video and you’ll be able to pick up on various scenes.

Below, you can watch my drone showreel and analyse how I’ve made use of audio design to try and bring each scene to life. Enhancing your audio production with the extra pieces of information really help in constructing a 3D world.

Moreover, if you’re shooting sci-fi, audio production takes a key role in creating entirely new worlds, giving them a futuristic, mythical feel. Just by hearing certain alien sounds, we as an audience know that the place we are seeing on the screen in front of us is not from this world. For example, the planets and locations throughout Star Wars all utilise layers of unique and interesting audio design.

Additionally, some audio design can act as a marker for a transition. For example, there’s a great scene in Saving Private Ryan (1998) where the sound of gunfire and bombs dropping slowly fades into heavy rainfall, transitioning seamlessly into the next scene.

If we’re watching Star Wars, a spaceship flying across the screen may bring with it a mask that switches us to the next scene on a different planet. The ‘whoosh’ and rushing sounds of the spaceship as it flies by can act as the accompanying sound for the visual transition. Note in the video below how the audio design overlaps.

In conclusion, audio production simply can’t be underestimated. It is, at the very least, 50% of your film.

Take time to analyse your favourite films and videos from an audio design perspective and understand why they’re so good. For example, Dunkirk. Analyse the audio design with the incessant ticking of the stopwatch. The tension is always being creaked up notch by notch with drones and unsettling ambience. There’s the rattling bass of heavy artillery fire and warplanes roaring overhead. You actually feel like you’re there.

Now, could you imagine how much worse this film would be if you had to watch it with the mute button on? This question should indicate just how important good audio design is.

Here’s a great breakdown of the sound design in Dunkirk which you should checkout.

It’s important to take the time to build this into your own post-production and ensure that your beautiful visuals are equally matched by fantastic audio production.

Don’t be afraid to get creative with it as well. In Star Wars, the swish and hum of the lightsaber was originally created from combining the hum of a projector and an old television set. Audio production can be a really fun part of the process! 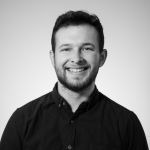 Filmmaker. 25. I have a real passion for travel and documentaries