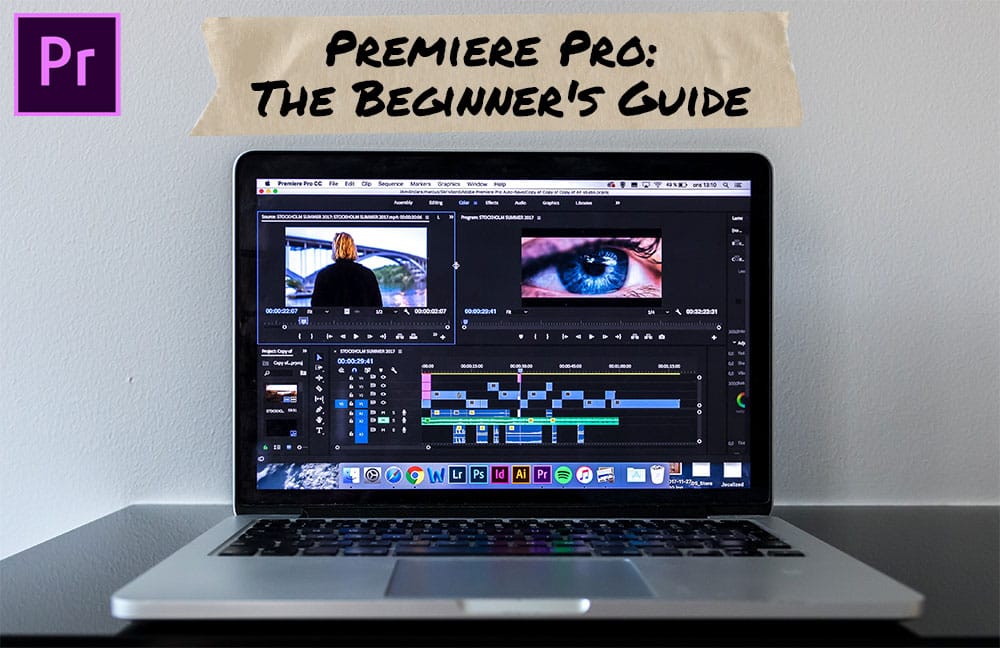 How To Import Footage in Premiere Pro [Beginner’s Guide]

This first tutorial will get you started at the very beginning of the editing process… how to import footage in Premiere Pro and organize it.

When you first begin using Premiere Pro, it can be a little bit daunting. There’s a lot to unpack and get to grips with. But don’t worry. Rather than turn and run for the hills, keep reading! We’re here to help with this new series focused all around Premiere Pro.

Remember the saying ‘failing to prepare is preparing to fail?’ – it could not be more apt when it comes to the start of a new project in Premiere Pro.

In other words, before you begin chopping and changing, stitching all of your footage together on the timeline, you want to build solid foundations by organizing it. This workflow is the same on both MAC and PC

Want to improve your editing skills further? Check out our review of Skillshare 🎓

Firstly, before you even begin to import and organize footage inside Premiere Pro, you must have files organized in one simple folder location.

So, if I went to Istanbul, there’s a folder titled ‘Istanbul’.

Within this folder, I will have the following structure.

This is important when it comes to organizing footage because it means that everything from the project file to the footage and the music is all in one folder.

On the other hand, if it’s spread across different locations in your PC, it’s very hard to relink media in Premiere Pro if something gets moved or you try to open up the project on a different PC.

You need to keep it simple. Nice and tidy 😉

Next, within the 02_MEDIA folder, I will then have several different folders, each containing footage from the different cameras and devices I have used to shoot. For instance, with my Istanbul project, I have one folder for the GH5, one for the GoPro, and one for the drone.

With this structure in place, you’re ready to import footage into your project.

How To Import Footage

Firstly, in Premiere Pro, ensure that you have selected the editing tab at the top.

You will see the project panel in the bottom left of your workspace. This is where you will be importing your footage. Indeed, it displays the text ‘import media to start’. Once this is set you’re ready to go!

There are 3 simple ways you can import footage into Premiere Pro (on MAC and PC).

Double-click the space. It will open up a new window where you can select which files you want to import.

Click File, import. Again, a new window will open up.

You can just drag your footage from its folder location into the project panel. However, it’s important to note that this way can be a little laggy, depending on how much you’re importing in one go.

Also, before you go diving into importing footage haphazardly, you also need to know about bins.

To clarify, a bin is a folder inside the project panel. It’s basically the same as the folders I have inside my 02_Media folder.

Therefore, you want to ensure that you create a new bin for each camera and each item you’re importing. In this example, it would be GH5, GoPro, Drone, and Music.

Alternatively, you can just import each of the folders into your project and they will be sectioned off as bins automatically.

At this point, congrats! You’ve successfully imported! Moreover, you’ve also done a little bit of organizing footage with the bins.

However, when it comes to organizing footage, Premiere Pro has a host of other things you can do.

For instance, at the very bottom of the project panel, you will see the option to toggle between icon or list view. When in list view, you will be able to see all of the details of each individual clip like resolution, duration, and file size. It’s all there.

In this list view, you can also organize the color assigned to the footage. For example, I may color my GH5 footage green, my GoPro purple, and my drone red. This makes it easier to locate in your project panel, as well as differentiate between your clips on the timeline.

To do this, select the footage you want to change and simply right-click. Hold your mouse over the label option and select your color.

And there you have it. This is how to import and organize footage in Premiere Pro. 👍