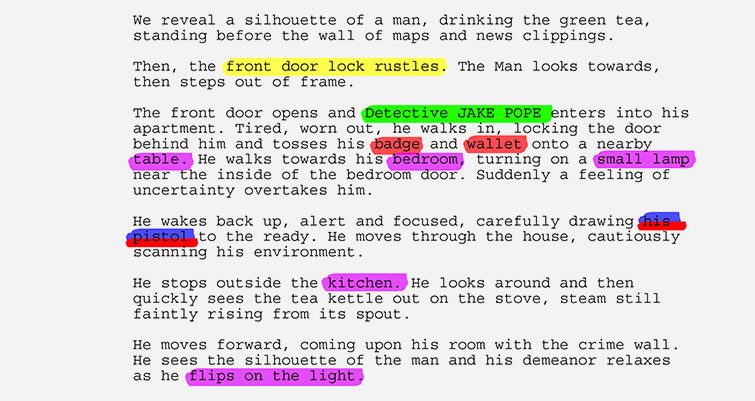 How To Complete A Script Breakdown (Free Template)

In this article, we look at a few top tips on breaking down a film script including a free script breakdown template at the end.

Once you have finalised your screenplay, you can enter pre-production.

Pre-production is the planning stage of the filmmaking process, and your very first task is to complete a script breakdown. By breaking down a film script, you can begin to accurately budget and schedule your movie.

Below you can find a free template to help you analysis each scene element in your film. Together with instructions on how to complete a script breakdown.

What Is A Script Breakdown?

A script breakdown is a process of ‘breaking down’ every element that appears in your film. This allows you to see what you need to gather in detail before you begin production.

An element is basically everything that you can visually see in each scene. Such as actors, props, vehicles, set dressing, costumes or special effects.

By listing all of these elements, you can begin to estimate your film budget. It is also the first step towards creating an initial film schedule.

The producer and 1st AD, generally do the script breakdown. But on independent films, the director might execute this task. It is not a complicated process. However, it can be time-consuming, especially if you are making a feature film. Traditionally breaking down a film script was done with pen and paper. These days, however, producers often use scheduling software.

Here is a list of the most popular script breakdown software.

But, you can still use the traditional method. Our free template download below can be used to draft out each scene element on pen and paper.

As we’ve said, an element is everything that you see in a scene. When you use a pen and paper to breakdown a script, it’s common to use highlighters. Different colours identify different elements.

For example – traditionally cast are blue, props brown and costumes orange. But you can use your own colour scheme when you breakdown your script.

Simply go through each scene and highlight elements. Then list all of these elements on your script breakdown template.

Rocket Jump Film School have made a great video on this process.

By breaking down all of the elements in every scene, you can begin to gather what you need to make your film. On a professional film set, every department completes a script breakdown.

Dividing Your Script Into 1/8ths

Another task completed during the script breakdown stage is to divide your script into 1/8ths. Doing this allows you to estimate the screen time of each scene and how long it will take to shoot. Although this is only an estimate, it is helpful when it comes to scheduling. In general, one page of a screenplay is one minute of screen time. But because scenes within a film script are different lengths breaking into 1/8ths makes it easier to schedule. For example, a short scene that depicts an establishing shot might take up 1/8th of a script page.

To divide your scene into 1/8ths, take a ruler and split your script page into eight sections. On an A4 script page, each 1/8th will be about 1 inch long. Then make a note of how long each scene is on your script breakdown.

Premium Beat has a helpful video that shows how to divide a script into 1/8ths.

On a professional film set, the 1st AD will break a script down into eighths as well as the script supervisor. Now that you have broken down your script into elements and eighths, you will be able to schedule and organise your production.

As a result of breaking down a film script, you will have detailed notes on every script scene. These notes will allow you to see what elements you need to gather before production. Additionally, you can use these notes to create a budget estimate and an initial schedule.

A script breakdown lets you see at a glance how many resources (actors, locations, props etc.) you need to find to make your film. By using this information, you can begin to create a film budget breakdown.

You can also use your breakdown to create an initial schedule. For example, if you have several scenes taking place in one location. You might choose to shoot all of these scenes in one production day.

Once again, you can do this by printing off-script pages and making a schedule chart via pen and paper. But often these days scheduling software is used.

After you have a preliminary production schedule, you can process to the other stages of film pre-production. Starting with the creation of a camera shot list.

Also, check out our library of other free production templates

Breaking down a film script allows you to budget, schedule, and begin to source everything you need to make your film. Get this first step right, and you will feel more organised and confident throughout pre-production.

Will be using a script breakdown on your next film?

Let us know in the comments section below.