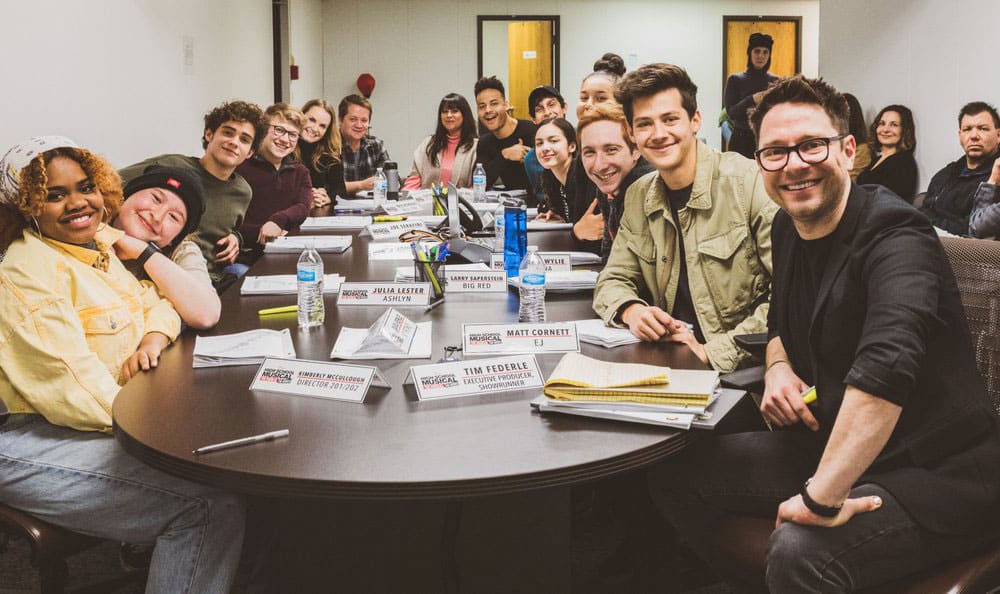 How To Do A Table Read [4 Simple Tips]

A script read through (also known as a table read) is your chance to hear the screenplay read aloud. This lets you make changes to the story action and dialogue before production begins.

In addition, you get to gather all of your team in one place. This lets you see how everyone works together and it’s your last chance to make any cast and crew changes. Below you can find a detailed breakdown of how to organize a table read.

In this article, we look at the process of a script read through, why they are important and how to plan one for your next film project.

A script read through usually begins in late pre-production. After all, you need to have hired your lead cast and crew. All heads of department should attend a read through and any lead cast with noticeable dialogue.

This includes the producer, screenwriter, and director. Some table reads will only have a handful of people, whilst others can have 30-50 people. You will need to decide how many people would benefit from attending.

In some script read throughs, executive producers and financers will attend. It allows them to meet the cast and check out the project. Your financers will want to know that their money is going to good use.

After deciding who will attend, you will need to contact everyone to find a free date. For reference, a short film read through will take half a day and a script read through of a feature-length film will last all day.

Your table read can happen in any location. It just needs to be big enough to fit everyone.

However, if possible, your site should be comfortable and quiet. Your team needs to focus on work, and you don’t want to have background noise or interruptions throughout the day.

Additionally, there should be the right number of chairs, tables and toilets. Provide snacks, drinks and even a meal if the read through lasts all day. For example, a 90 page script is the same as 90 minutes of screen time. With feedback, this script can easily take three times the amount of time to read out loud.

If a lot of people are attending, you will need to rent out a room. You can hire a room at schools, colleges, local theatres and community centers. Alternatively, if you are struggling to get everyone together, you could do a remote Zoom read through.

It is also common practice to record a script read through. Place a camera with audio at the back of the room. You can then use this recording later to remind yourself of any script changes.

During a script read through, everyone sits down in a circle facing one another. The reading would begin with introductions, followed by a brief greeting from the director or producer. It’s typically the director who leads the table read. This will be the first time the whole cast and key crew are together.

The process itself is simple:

These days people can read the script from tablets and laptops. However, it is still a good idea to print out copies of the script, particularly for the cast. Also, bring pens and paper in case people need to make notes. Make sure to record the table read with the camera on the actors.

You should listen carefully to the actors as they read out the dialogue. Conversations that read great on paper might not work well when read out loud. A table read is also the time to make dialogue changes.

Also, it is likely your actors will ad-lib some dialogue too. Everyone in the room will have feedback on a scene based on their own department’s needs. A script read through is about fixing problems before production begins. By doing this, you save time, money and potential arguments on set. 😉

Lastly, you will make changes based on your table read findings. This is your last chance to make any casting changes. For an actor, a table read can be as important as an audition. For example, if there was no chemistry between the actors during dialogue, a director might change the cast.

You will also need to adjust dialogue changes or fix any errors in the script. The director and producer might meet up together to discuss the table read together. If something isn’t working, now is your time to change it.

Remember that you have a recording of the reading and notes to review. Re-watch the table read and address any problems that were brought up. These are the same problems and concerns that were going to be brought up during production.

After you have made these changes, you will need to follow up with everyone, such as sending out copies of the updated script. If required, you can organise further production meetings to fix any additional problems.

Now that the table read is complete, you should feel a lot more confident going forwards on your project.

To sum up, a script read through is an easy way to solve script and teamwork problems before production. By taking the time to plan a table read in your pre-production plan, you effectively save time and money later. 👌