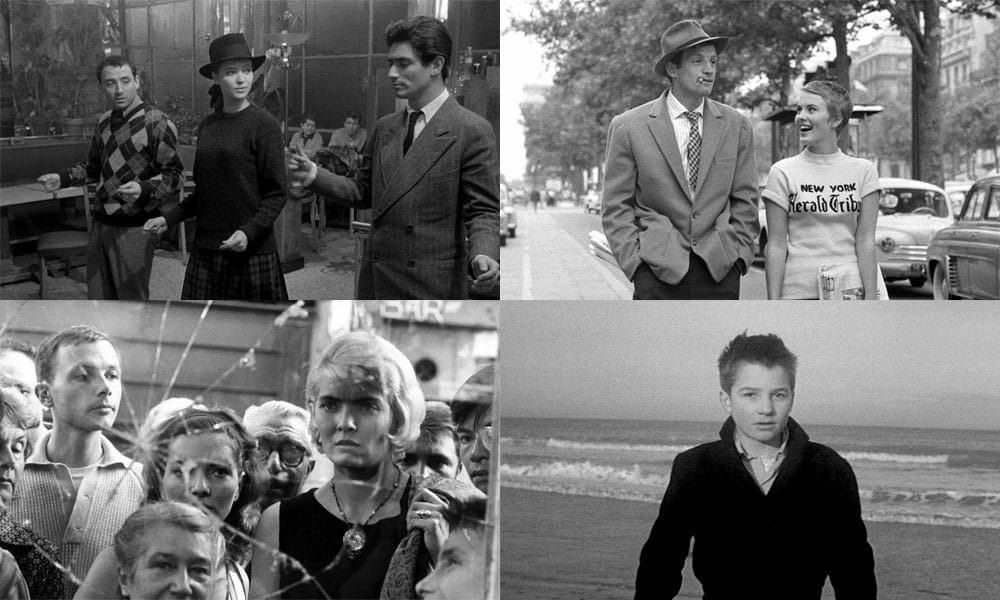 French New Wave cinema was an art movement created in the 1950s. The idea was to make independent films outside of the Hollywood system.

The two main figures in this art movement were directors Francais Truffaut and Jean Luc Goddard. They had new ideas and made films that would change cinema forever.

This movement is the most important for filmmakers because it gave birth to auteur theory and indie films. Below you can learn more about this art movement including a list of french new wave directors and film examples.

What is French New Wave Cinema?

The French New Wave (La Nouvelle Vague) is a film movement that started in the 1950s. The movement valued the director and aimed to give them complete control over their films.

The movement gained popularity worldwide and influenced many filmmakers then and today. Without French new wave films, there would be no modern independent cinema.

How Did the Movement Start?

In the 1950s, Cahiers du Cinema was one of the most influential filmmaking magazines. Working for them was a young writer and director called Francois Truffaut. One of the famous articles he wrote challenged Hollywood and called their work dull.

His ideas began a new art movement and the auteur theory, which created the idea that the director should have full creative control over a film. As a result of this new idea, Truffaut and other writers began to direct films.

The films they made were indie, had low budgets and used natural lighting. In time this movement was called French New Wave Cinema.

There are 3 main areas that define a typical french new wave film. These are the following:

The main part of French new wave cinema is that it rejects the studio system. These films were independently made on shoestring budgets. They were shot on location, making use of natural lighting and sound. Also, it’s typical to see friends of the director making up some of the cast a crew.

Hollywood films focus on strong storytelling that aims to entertain a large audience. The scripts of the French new wave were more challenging. They featured real life problems and explored complex ideas.

Essentially they wanted their audience to think when watching.

The film’s also had low budgets, which inspired new camera methods. Most notably, the filmmakers used jump cuts and long takes. They also made use of doc style and handheld.

Their techniques were practical and gave the movement its unique look.

Truffaut was the founder of the French new wave and directed many films within this style. Whilst working as a film writer, he grew tired of the influence of Hollywood cinema.

As a result, he devised the auteur theory, which gained popularity in the 1960s. He is most known for the following French new wave films.

Goddard worked at Cahiers du Cinema alongside Truffaut. He questioned film quality and believed films were becoming less creative. So he and other writers began to make films following the new wave techniques.

Notable French new wave films by Goddard are the following.

Her films use real people, doc style, shooting on location and natural lighting. She is most known for the following films.

Truffaut’s first new wave film was a huge success, and he won the best director at Canne. The film is a deeply personal coming of age film that follows the life of a 13 year old boy. It features many of the themes of new wave, such as long takes, jump cuts and freeze frames.

One important aspect of the film is the camera movement. Unlike filmmakers of the time, the camera acts as a documentary film camera. It follows the actors around real locations instead of being on a tripod. The use of a freeze frame and 4th wall adds to this effect.

Goddard joined his co-worker Truffaut to make another feature based on new wave ideals. The film follows the life of a petty thief in 1960s Paris. Similar to 400 blows it makes use of long takes, real life locations and jump cuts. It also uses tracking shots to follow the lead actors around the scenes.

What stands out about Goddard’s film is that it uses the camera to move between spaces rather than the film’s plot. Like all new wave films, it breaks the rules of Hollywood polished cinema.

Varda was not a trained filmmaker or writer. Instead, she came from a photography background which you can see in her stylish camera work. In this film, we follow two hours in the life of Cleo, a young pop star waiting to find out if she has cancer.

The film uses tracking shots, a handheld camera and freeze frames. Like the other new wave films, it is shot in Paris using natural light and long takes. In 2019, a BBC worldwide poll awarded Cleo from 9 to 7 as the second greatest film made by a female director.

How the Movement Changed Cinema

Although the French new wave took place 50 years ago, the movement hugely impacted cinema. Before, if you wanted to make a film, you would need a high budget and a studio to help you. However, French new wave directors showed how it’s possible to make a successful film without a studio.

In many ways, the filmmakers were ahead of their time. Since then, many modern films, commercials and art have all found influence from the French new wave. This influence includes famous directors such as Stanley Kubrick, Stephen Spielberg and Wes Anderson.

To sum up, the French New Wave cinema paved the way for all indie filmmakers. Before, filmmakers would struggle to make films without a studio. However, the movement proved that you could make a successful film without a large budget.

Lastly, it meant you could make a film without a big story. At the time, Hollywood ruled the cinema and aimed toward a large audience. Whereas new wave filmmakers told small stories that focused on real life.

You can still find the influence of the new wave in cinema today. Without it, there would be no low-budget feature films.