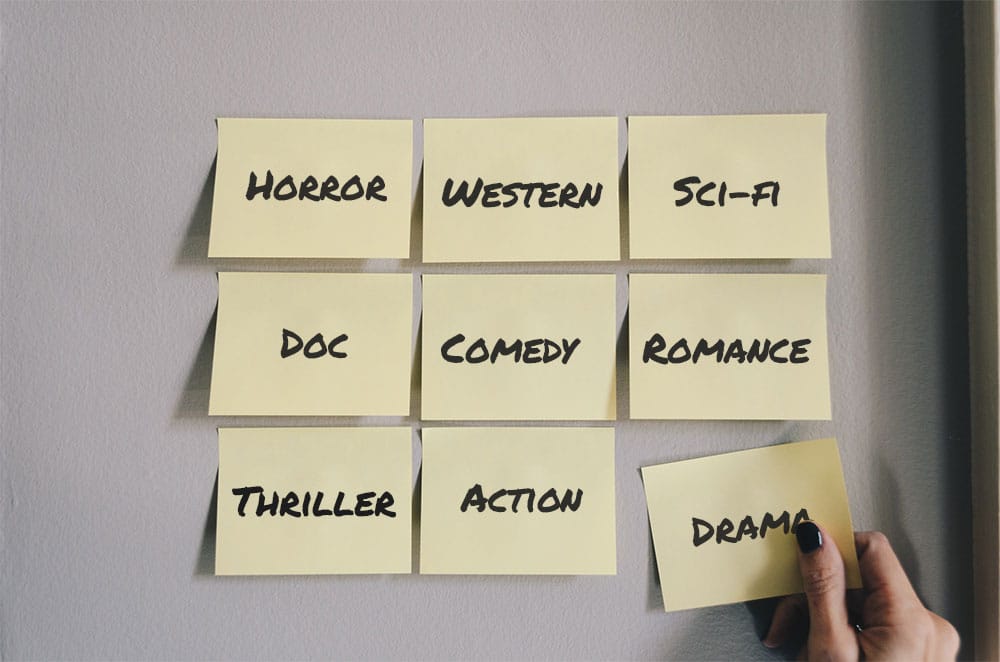 Coming up with short film ideas doesn’t have to be difficult. In fact, it’s likely you already have a ton of story ideas inside of you waiting to be found.

Story development is also one of the most creative filmmaking stages. When thinking of movie ideas, there is no wrong answer – let your imagination run loose!

So, whether you are making a student film or looking for a festival win, these tips below can help you create new and valuable short film ideas.

Before coming up with movie ideas, you need to know your audience. That is to say, every film has a different purpose. Your film might be for a school project or a competition.

Sometimes there are rules you need to follow to show your film to a particular audience. For example, some film festivals have running length limitations. Often short films need to be between 5 and 15 minutes long.

It also would be a good idea to watch films that have the same audience as yours. For example, previous award-winning films, or short films within your genre and budget.

Ideas for a film can come from many different sources. The easiest way is to seek inspiration from other mediums such as books, art, music, newspapers, and even other films. For example, there have been many adaptions taken from the bible.

Being inspired is not stealing; you can modify the story to your style. You might like the conflict, twist, or characters within an existing film and use these elements in your own short film idea.

Also, if there is a film or book you like, write down what you enjoyed about it. Understanding what makes a good story is an important part of scriptwriting.

As well as fictional stories, there are also real-life stories. You can create movie ideas based on your own life experiences. Everyone has a story to tell, and it could simply be about your relationships, experiences in school or work. However, make sure to change the story slightly in case someone sues you or it offends someone in real-life.

Short film ideas don’t need to be as in-depth as feature-length films. A short film can be a single scene, a character piece, or tell a joke. Often filmmakers use short films as calling cards for future work.

Ideas for a film can also come from genre codes. These are basic rules that almost all films within that genre follow. For example, the genre codes of horror are darkness, evil, unexplained things and fear. The genre codes affect all aspects of a movie from setting, plot, character and props.

Most importantly, by writing within genre rules, you make it easier to create short film ideas. Many screenwriters have a genre in mind before they start writing. This allows you to have an exact audience for your film, which will help when you go to sell it. There are also genre-specific film festivals.

Firstly, your film’s story needs to have emotion to connect to its audience. When coming up with short film ideas, you can use emotion as inspiration. For example, you can write a film around the theme of love, anger, jealousy, pride, or happiness.

Each of us has had different life experiences, but everyone can relate to emotion. By grounding your movie ideas in emotion, you can be sure that your audience is involved.

Try using a mix of techniques to write your stories. Such as placing your real-life experience of love, into a horror genre. Doing this can create different layers into your screenplay and make it unique.

Lastly, film ideas should be mindful of budget. Your budget will determine what type of film you can make.

So, if you are a student, you might not have the budget or knowledge to make a science fiction film. Likewise, a film producer will not take a chance on an expensive film by a first time writer.

By all means, you can be creative when you write your short film. Just keep in mind the budget and how you are going to make the film when writing.

Another tip is to write a list of what you already have access to, such as a list of locations, props, equipment and crew. This way you can write a film around what you know you have.

Also, this is particularly helpful if you know that you will be working with a low budget. 👍

In short, as shown above, movie ideas can come from many different places. Filmmaking is also all about teamwork, so when you develop ideas, share them with others for critical feedback.

How do you come up with ideas for film scripts? Share your tips below!