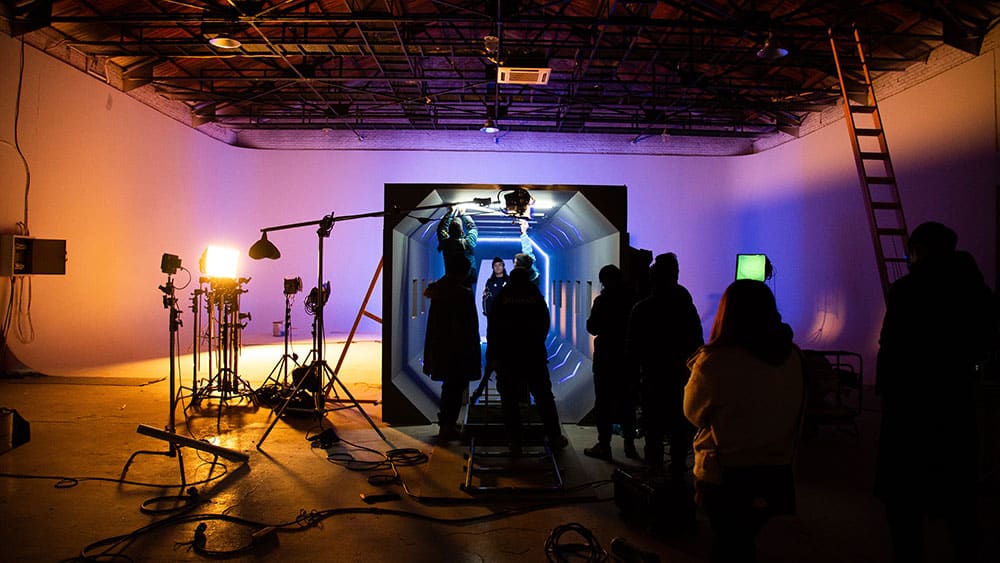 The set designer drafts and creates the sets that appear in the film. They work in the art department with the production designer.

In this article, we break down the role of the set designer (sometimes known as the draughtsperson). They play a key part in creating the film’s world. What sets they make will depend on the film’s genre, budget and the director’s vision.

It is a popular job role that requires both creative and technical skills. Keep reading to learn more about this role, including a set designer job description and salary expectations.

What Does a Set Designer Do?

The set designer is responsible for designing the sets for film, TV or theatre projects. They do this by creating 3D designs, plans and blueprints of the set. You will find them working closely with the production designers and art directors.

On low-budget sets, the production designer might also build the set. In contrast, films with a budget have a set designer and a construction team. This team includes carpenters, riggers, plasterers, scenic painters and various stagehands. Sometimes this team is the largest on the whole film set. For example, when on fantasy and sci-fi films.

Film set design is a very creative job. After all, it’s their designs that you see on the screen. How the audience views the film’s world relies very much on them and their ability to bring the set to life.

The set designer job description can change depending on the film’s budget. Some sets won’t have one but, instead, hire an art director to look after the locations. However, on creative projects with a set designer, there are three main tasks that they will follow.

Film set design begins with a script breakdown and a meeting with the key creatives. They will then hire the construction team alongside the production designer. Before making the sets, they will create sketches and mood boards to show to the director. Then they will build the sets and manage them throughout production.

Overall the set designer job description focuses on pre-production. However, there are some duties during filming. To begin with, they will look after the sets and manage their team’s budget. The set must be safe for the crew and cast to work within. After, they will also help take down the set, which is known as striking the set.

To begin with, you might get a degree in filmmaking. You can also find film schools that teach construction and film art design. Keep in mind that education can only teach you the basics, and you will still need work experience.

To find work experience, you can start with an internship in film or theatre. The entry-level roles in the art department are a runner or art assistant. You will need to learn a range of film set design, painting, and building skills to get into this role. Because it is a higher position, many people in this role have plenty of experience and a portfolio of work.

The film set designer must also network and make contacts.

The set designer leads the construction team on a film set. You can work up to this role, from runner to art department assistant and any stagehand position. It’s important to learn as much as possible about the film industry and how the art department works.

Then, when you have enough experience, you can start to find paid work. To do this, create a portfolio of work and make the most of your film industry contacts. You can also begin by working on low-budget films and then working up to higher-budget sets. Keep in mind, that film crew are always freelancers working from project to project.

The best set designers learn a mix of skills from scenic painting to model making. They also work with the same directors and producers. For example, Adam Stockhausen and his work on Wes Anderson’s set design. Together they have worked on many films, such as The Grand Budapest Hotel (2014) and Moonrise Kingdom (2012).

For example, on a TV show, a fully trained film set designer will receive between £200-£260. Although keep in mind for large art projects such as fantasy and sci-fi, you will make a lot more. You can find updated advice on day rates by BECTU.

We hope you have learned more about this job role. To sum up, this is a highly creative, hands on job role. You can work up towards this role by working within the art department. However, you will still need to learn skills in your spare time and create a website portfolio.

This career is perfect for people who want to work as part of a team, create with their hands and use their imagination. It will take time to make enough contacts and skills to find highly paid work in this role. But if you are good at your job you can have a long career in set design.

Want to learn about other film crew roles? check out our job roles section.