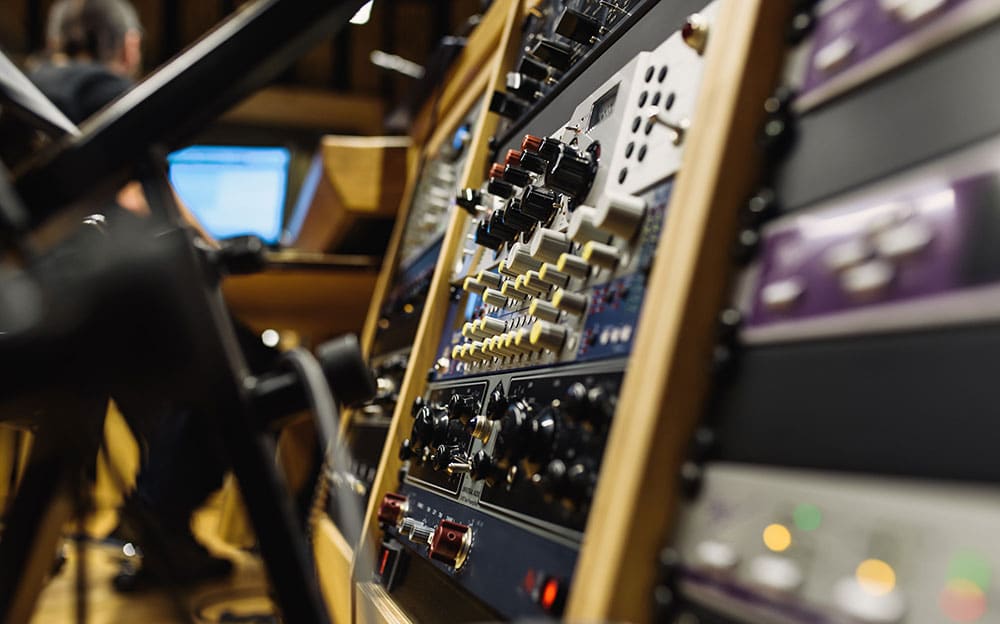 The film sound designer creates the soundtrack of the film. They work within post-production and use a range of audio from sound effects, dialogue and music to make the final track.

In today’s article, we are breaking down the sound designer (also known as the audio designer). First, you must understand they don’t record the audio on set. Instead, they work during editing.

The sound of a film is one of the most crucial elements that make up the world of a movie. This job is highly creative, and people often dismiss the importance of this role in filmmaking.

What Does A Film Sound Designer Do?

The sound designer creates the film’s soundtrack. This track is a mix of all audio within a film from the actor’s dialogue, sound effects (SFX), and the scene’s atmosphere. You will find them working in the editing room, but they may start work as early as the planning stage.

On low-budget film sets, they will work alone. However, the sound designer will work alongside a team if the budget allows it. This team includes foley artists, audio engineers, supervising audio editors and ADR teams. They will also work closely with the music editor.

The role of an audio designer will change per film project. However, they have a large creative say in how the audience views the film. On some projects, they will even work closely with the director and music composer.

The sound designer’s job description changes depending on the film’s budget. For example, on a low budget they will work alone to create the entire soundtrack. However, if there is a budget, they might lead a large team.

If the director views the soundtrack as an important element, they will hire them when planning the film. In this case, the sound designer will work closely with all creative departments to design the film’s soundtrack. In particular, this will happen more in movies that need a lot of world building (e.g Sci-fi and fantasy).

First, the sound designer will attend script breakdown and have meetings with the key creatives. This might mean discussing audio with the director and DOP even before they shoot the film. The audio designer might hire a team and begin to create the soundtrack early in the planning stage. However, on low-budget film’s they will start work much later during editing.

The film sound designer will watch over the edit and start creating the soundtrack. Every film project needs different types of sound effects. On some projects, the entire audio will need recording, and actors will also carry out ADR. Next, the sound designer might use computer effects or create new ones with foley artists. Lastly, they edit all of the sounds together as one soundtrack.

The audio designer must learn a mix of filmmaking skills. To begin with, you can get a degree in audio recording, which will likely cover a range of media from film to radio. There are also lots of filmmaking courses and online classes that cover this topic. Keep in mind that education can only teach you the basics, and you will still need work experience.

To find work experience, you can start with a traineeship in a post house or studio. The entry level roles for sound designing are audio assistant or runner. Work experience in a studio will show you the basics of editing audio for the screen.

You will need various creative and tech skills to succeed in this role. Skills include full filmmaking and audio recording knowledge. The film sound designer must also network and build contacts.

The audio designer is in charge of a film’s soundtrack. You can work up to this role, from runner to audio assistant and sound editor. In addition, you will need work experience in a studio.

When you have enough knowledge and experience in this role, it’s time to apply for jobs. You might work full-time for a company or freelance. It’s more common for sound designers to freelance and work up from low-budget films to high-end film and TV projects.

Sound designers also have the skills to work across all aspects of media, including games, radio, and even virtual reality. It is high in demand skill with a growing need for people in this role. Once you have the experience, you can expect a long career in sound design.

The day rate of all film industry crew members depends on the project type and budget. So, you will get less pay for a low-budget indie film than for a high-end TV project. If you look at our crew rates, you can see how the rates change depending on budget and job role. Of course, your pay will also take into account your personal experience.

The sound designer position is a high-level role, which means you will get paid more than a sound editor but less than a composer. For example, on a TV show, a fully trained film sound designer will receive between £350-£430 per day. Whilst on a high-end feature film this rate might increase to £515 per day. You can find updated advice on day rates by BECTU.

To sum up, we hope you have learned more about film sound designers. This job is a good mix of both creative and practical skills. If you are interested in cinema and audio design, this might be the perfect job for you. Better still, this role is in high demand within other creative industries, so when you have the experience, you will find work in this role.